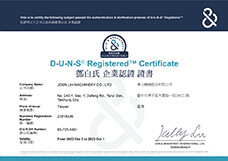 Established in 1988, Joen Lih Machinery Co., Ltd. is an experienced specialized maker of high-precision and CNC (computerized numerically controlled) surface grinding machines. The company claims that its competitive advantage lies mainly in its ability to develop and manufacture machines featuring superior rigidity, accuracy, stability, and efficiency, as well as ease of operation and maintenance.

Joen Lih stresses quality, its stated policy being “Quality a priority for survival, service first in perpetuating the enterprise.” All the company’s machines are assembled according to strict and unwavering procedure to ensure quality consistency. This approach, Joen Lih claims, has resulted in its machinery winning a reputation for outstanding performance in the international market.

The firm’s insistence on “quality first” is manifested in its ISO9001 certificate, as well as in the fact all of the company’s products have been certified as in compliance with electromagnetic compatibility (EMC) standards set by SGS.

To further strengthen its business prospects, Joen Lih began cooperating with a Japanese partner in 1996 to jointly develop and manufacture machines meeting the variety of special specification requirements emanating from customers worldwide.

With the partner’s help Joen Lih is actively developing upper-market reaches in the United States, Japan, and Europe.

Joen Lih recently demonstrated its latest high-precision CNC profile surface grinding machines model, the JL-2550CNC & JL-4080CNC. The company says that the models are designed to meet “all current and future” grinding requirements from its customers. The new models are engineered and manufactured to attain surface grinding accuracy and finishes that fully comply with the highest industry standards.

Joen Lih claims that the main structures of all its machines are made of top-quality FC30 fine grey iron, which features out-standing strength and inherent vibration-dampening characteristics. The testing software to analyze the stress-endurance capabilities of the structures, distortion and vibration, and other variations to achieve the best frame designs.

To ensure its machines provide the highest efficiency, Joen Lih has adopted a top-end servo motor to drive the ball screws and liner guides. This realized high-speed machining consistency with high-frequency response.

Every Joen Lih made model features comprehensive function and easy operation. The company has adopted the product, which has a extremely wide range of field applications and is capable of controlling two to five working axes simultaneously.